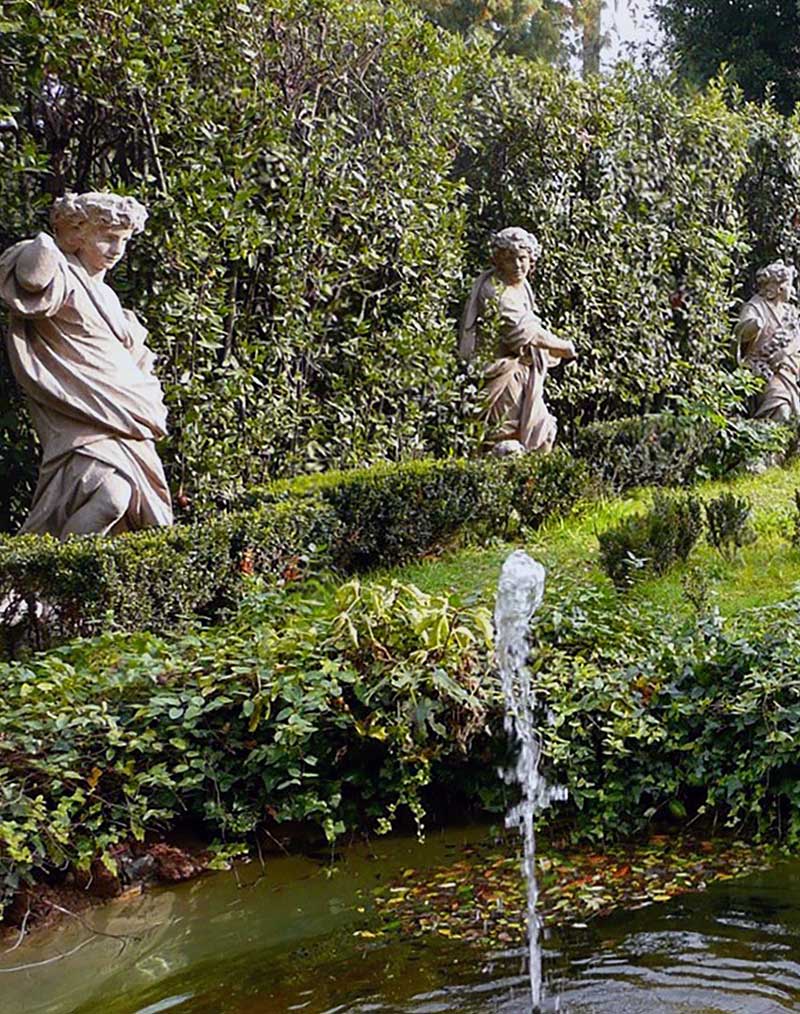 When we talk about the villas in Rome, we don’t have to think about the current concept of a villa, that is, a house of enormous size and sumptuous.

This idea widespread in our minds is completely inaccurate when we talk about the villas of Rome, as these buildings, built within the walls of Rome or in its vicinity, represent real works of art rich in cultural treasures of priceless value.

This is the reason why we are talking about the villas in Rome and today we present one of these villas, namely Villa Sciarra.

A brief introduction and the history of Villa Sciarra

It seems, in fact, that the history of Villa Sciarra begins before that of ancient Rome. In fact, the stories tell that in this area there was an ancient sanctuary in honor of the nymph Furrina, a very mysterious archaic divinity linked to the waters and who had his sacred wood right on the slopes of the Gianicolo, in the park of Villa Sciarra.

With the advent of the Roman Empire, the fate of this place changed, until it apparently became the famous Caesar’s Gardens, that is the most famous Caesar’s villa where the Egyptian Queen Cleopatra was also said to have resided.

But it is from 1500 that the territory of Villa Sciarra changed to become what we now see.

Historical sources tell us that in the seventeenth century two buildings were erected in the territory of Villa Sciarra: the first was unspecified while the second was commissioned by Monsignor Innocenzo Malvasia, who built the Casino Malvasia there. But be careful: in those days a “Casino” was not a place to gamble or carry out other activities, but only a country house!

As often happens with villas and palaces, Villa Sciarra also passed from owner to owner, but it was only when it passed into the hands of Cornelia Costanza Barberini that it took on the appearance we now see.

This woman, wife of Giulio Cesare Colonna di Sciarra, enlarged and embellished the villa by also purchasing some surrounding territories.

From this moment, we can say that the descending parable of Villa Sciarra began. Wars and erroneous financial speculations led the territory of Villa Sciarra to be divided into lots and made a building area, while the villa complex first became the property of the Credit and Fondiaria Edilizia Company and, later, of the spouses George Wurts and Henriette Tower who gave it the look we see now.

On the death of the spouses, the villa was sold to Benito Mussolini who donated it to the city of Rome, making it a public park.

As mentioned, Villa Sciarra is a very large territory of over 7 hectares in Trastevere, so it is not surprising that there are a lot of things to see inside.

In the territory of Villa Sciarra, in fact, there are many statues and fountains to which are added the hedges worked in topiary art (the practice of transforming the hedges into geometric or animal shapes, as Edward Mani di Scbice did, to understand).

In addition to this, there are many other points of interest in the territory of Villa Sciarra, among which we point out:

Last but not least, the Museum of Mathematics was established in the small villa called “il Castelletto”.

When to visit Villa Sciarra

As mentioned above, Villa Sciarra is now a public garden, so it can always be visited for free (the buildings inside, however, may not be accessible to the public), so you can go to it at any time of the day to enjoy the works inside or, why not, a little cool from 7h. in the morning until sunset.

The place is also suitable for children, as near the aviary you can also find a playground dedicated to them.