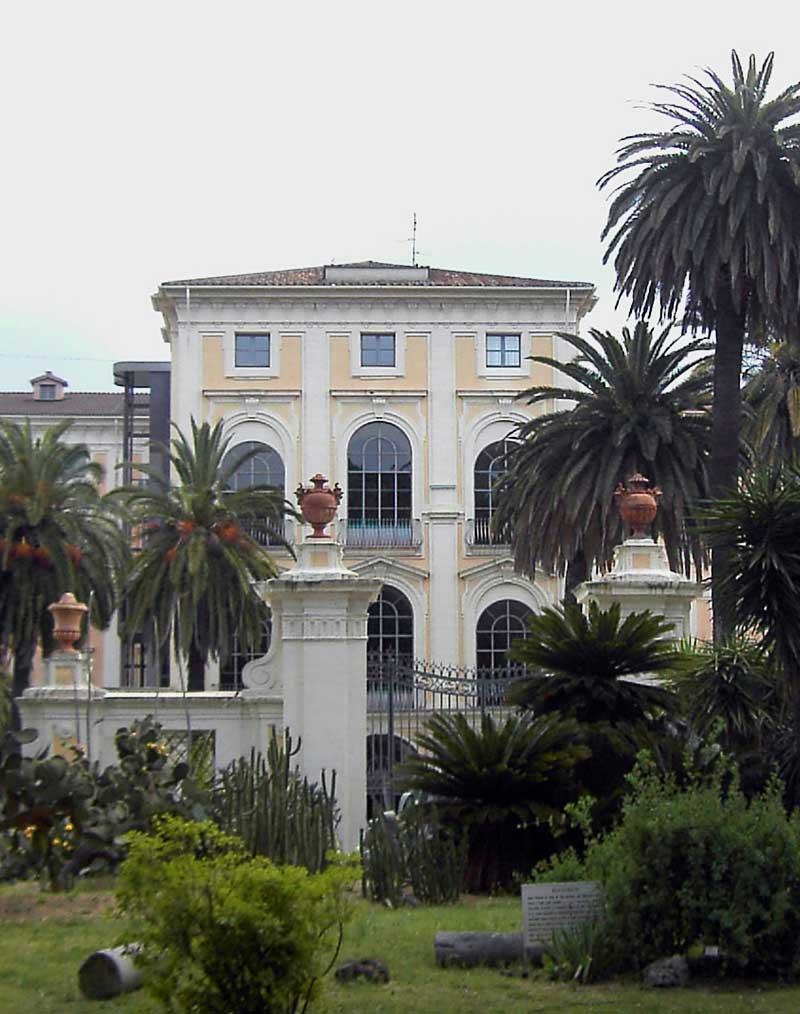 As already mentioned in other articles, Trastevere is the largest district of Rome, so it’s no wonder that there are a lot of different places to visit in its territory.
Each of these places has a history and at least one reason to be visited and, little by little, we will present you with one of these in our articles.

In this article we present the Palazzo Corsini alla Lungara, a building that stands right in Trastevere, in the lower part of the large Villa Corsini and in front of the Villa Farnesina.

The history of this building is very interesting. Historical sources report that it was built at the end of the 15th century by the Riario, the nephews of Pope Sixtus IV.

Little is known of its fate at least until 1659, the year in which it was inhabited by Queen Christina of Sweden.
In fact, his conversion to Catholicism and his stay in Rome dates back to that period.
The Queen was a woman of great culture and loved art so, after having made some changes to the building, she hosted the first meetings of what would later become the Accademia of Arcadia.

In 1689 the Queen died and the palace entered a quiet phase until 1736, when it was bought together with its garden by Cardinal Neri Maria Corsini, nephew of Clement XII.

He had the palace further restructured, entrusting this work to Ferdinando Fuga who, at the time, worked for the Pope at the Palazzo del Quirinale and the Palazzo della Consulta.

The architect Fuga transformed the palace into a luxuriant palace and giving it the look that we can admire even today.

But the history of the palace certainly does not end there. In fact, it returned to history when the Napoleonic occupation took place in Rome.
In that period, in fact, many French personalities lived in Rome and Palazzo Corsini alla Lungara became the home of Giuseppe Bonaparte, brother of the Emperor Napoleon Bonaparte while remaining in fact the property of the Corsini family.

Other events concerned this building in the following years.
On June 3, 1849, in the upper part of the villa (casino dei Quattro Venti), a bloody battle took place to defend the Roman Republic from the French, while in 1856 part of its gardens on the Gianicolo were joined to Villa Doria Pamphilj.

There are many reasons to visit a palace like this, but in this article we are going to include three, the most important.

La Galleria Nazionale D’Arte Antica in Palazzo Corsini is a museum that contains many works of Italian and Flemish painting from the 16th and 17th centuries.

Among the various paintings that you can find here you can admire some by Caravaggio, Rubens, Beatro Angelico but also by painters less known to the general public such as Murillo, van Dyck, Maratta and many others.

If you love art and painting, therefore, you cannot help but visit this art gallery. One of the most beautiful in Rome.

Founded in 1603, the Accademia dei Lincei is one of the oldest scientific institutions in all of Europe and its purpose is to be a meeting place in which to develop science.

Its name, Lincei, derives from the lynx, an animal that was thought to have keen eyesight.

Since this is the seat of the Academy in question, next to it stands its Library which houses several books both manuscript and printed and merges both the Corsini family’s book collection and that collected by the Academy itself.

If you like books and reading, you will not be able to resist the opportunity to visit this library.

The Orto Botanico di Roma is part of the Department of Environmental Biology of the “La Sapienza” University of Rome and has a size of 12 hectares.

It has didactic and educational functions, but also of scientific research and hosts more than 3000 species of plants, including garden and vegetable plants, palm trees, aquatic plants, bamboos, ferns and many others.

Of particular interest are the rose garden and the Japanese garden designed by the architect Ken Nakajima.

If you love nature and you like to know and discover new plants, you cannot miss a visit to this magnificent botanical garden.

Other Useful Information about Palazzo Corsini

If you have decided to take a trip to Palazzo Corsini, here is some useful information to plan it in the best possible way.

How to get there: The best way is by using the buses. Check the best one to take based on the area you are in by comparing local times.